Home > The Popularity of Henna Tattoos 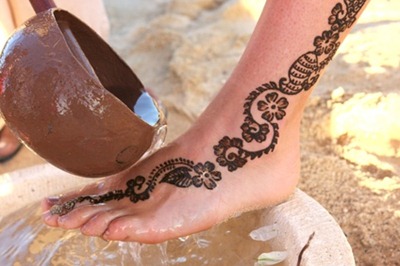 It is not entirely known where henna tattoos originate from. Most people suspect southern Asia, particularly India. These tattoos are made by crushing the leaves of the henna or mehndi bush, mixing them with water and applying the resulting paste on the body in different patterns, where it is then left to dry.

These henna tattoos have become very popular since they are painless. As a result, the tattoos can be placed anywhere on the body. However, in reality the most common areas used are the upper body and the hands. The lower extremities are usually avoided since applying the designs there can be difficult. Apart from the lack of pain, henna tattoos also carry no risk of infection since the outer layer of the skin is never pierced with a needle. The only danger involved is that the receiver could suffer from an allergic reaction to the chemicals that are used nowadays in the tattoos along with the henna paste.

Another reason why henna tattoos are so popular is the fact that they are temporary. Some people want to experiment with the look of having a tattoo before deciding whether to get a permanent one or not. There is also no need for the fear that they can get bored and eventually hate the design they chose but would still have to live with it the rest of their lives. Most henna tattoos wear off after a week, maybe ten days. If the artist is particularly skilled and used a concentrated henna paste the tattoo can last for two weeks, however after that time the henna tattoo will have completely faded leaving no visible signs that it was ever there.

The Process and Designs

The henna paste produces only dark colors which can be separated into several different shades. However, the only acceptable color for the henna tattoo should be brown. There are places that use black ink in the mix which contains a lot of harmful ingredients. Other colors such as red should be avoided as well. Only accept brown paint for henna tattoos.

There are numerous designs that can be applied on the body. Some are influenced regionally, but most just depend on the skill and imagination of the tattoo artist. Some of the most popular are floral designs that can run from the hand up the arm. Such henna tattoos look very beautiful and feminine and are popular with women everywhere. Nowadays there are plenty of stencils available that just need the henna paste applied over them and they can produce an excellent design in a very short time. For those that want complex and unique designs they will have to spend a great deal of time at a tattoo studio.

Henna Tattoos and their Culture

Henna tattoos can have a deep meaning in certain cultures. In India women show off their tattoos during weddings and other festivals. These are usually applied on their arms, ankles and feet. A typical Indian bride has beautiful henna tattoos that cover the visible parts of her face. Other Asian countries consider these tattoos a good luck charm. Arabic nations use them to depict passages from the Koran. However, western countries use them purely for their cosmetic appeal.

In the United States these tattoos have become popular thanks to Hollywood. Most notably, Madonna had her hands decorated with henna tattoos in the music video for her song “Frozen”. After that the tattoos became very popular with a lot of musicians and actors who loved the beautiful flower patterns that can only be achieved with henna tattoos.